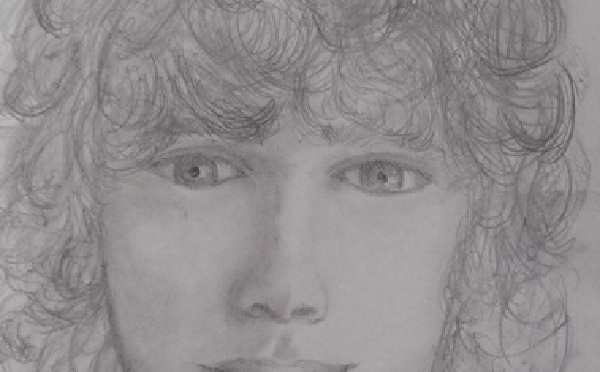 “Catch me, Pan!” the boy yelled, his head covered with rusty tendrils flashing like copper under the noon sun as he tore off around the fountain and disappeared like the light of a wisp through the garden gate, laughter trumpeting behind him, echoing off the stone walls of the courtyard. Elli pulled herself up to stand on her toes, so she could peer over the fountain’s bowl at John Pan, soft gray eyes gleaming for permission, wet lips like rose petals pursed open expectantly. Pan chuckled softly as he gave her a gentle nod, and the tiny girl grinned broadly before hurrying off as fast as her legs would carry her, deeper into the folds of the maze, in pursuit of their curious guest, the sash of her dress trailing along in the dust of the gravel path.

“The boy has no idea what has happened?” Pan asked quietly, eying Longfellow Grubb with caution.

The man wiped a worried hand across his mouth, pulling the curl of his scraggling black beard as he shook his head on a weighty sigh. “Only thinks he’s come to see the Queen. I didn’t have the heart to tell him anything. Such a happy child. He’s brought nothing but joy to my sister’s house these months. It’s truly a shame, what’s happened. Did they manage to get away?”

“You know as much as I,” Pan answered, looking up to the window where Phileas Foote stood watching the children running circles in the garden, Queen Tessandra tending his latest wounds. Foote might not ever admit it, but he needed the fairy as much as the girl did. It was obvious he was not pleased the boy had been brought there, but there was little to be done about it now, and it was probably for the best. By the looks of him standing there taking his nursing begrudgingly, Pan had little hope there was any good news to be had.

Longfellow looked around, to see what the old god was staring at. Pan could almost see the idea of a bird in the distance clouding the man’s eyes as he squinted right through the manor walls, through Phileas and Tessandra, off into oblivion. The man had no idea where they were or how he had actually come to be there, but he wouldn’t have made it even half way, if it had not been necessary for the boy’s safety, and if his trust had been even the slightest bit questionable, he would have found himself lost for an eternity in that labyrinth.

“Thank you for bringing Peril to us,” Pan said, placing a hand on the man’s shoulder, to guide him safely on his way through the iron gates. “Tell your sister I will bring the boy back to her as soon as we are certain it is safe.”

“She’ll be grateful to hear it,” Longfellow answered, tucking his hat onto his head as he stepped out into the road of a thousand journeys that would carry him the long way home to Aelwyd.

“Your Queen is forever in your debt,” Pan bowed his head in humble response before closing the gate between them.

In an instant, the fairy on the other side of the bars disappeared as the illusion fell away and Alistair Godfrey came galloping around the side of the manor house, beaming with that enigmatic smile which had first captured Pan’s affection, a perilous boy destined for great and perilous things, the god thought as Elli waddled around the corner a moment later, looking perplexed. There was no sign of the fountain or the wide wooden gate, or the brilliant trail of flowers winding through the hedges. Even the dress she had worn, navy adorned with choral, had vanished, and suddenly she was wearing dirty purple corduroys again, which reminded her of the mud pies they had made that morning and left baking in the sun by the greenhouses. She wondered if they had disappeared too.

“You didn’t catch me!” the boy laughed, craning his neck to look up at Pan as he reached his side.

The old god ran his hand over the boy’s tangled locks, still soft as as a baby’s, but so thick they stood out from his head in every direction, lending him the look of a precariously domesticated lion, though the untamable spark in his eyes spoke of the wild that would ever throng within him.

He didn’t have the heart to tell the boy either.  “I was just saying goodbye to Longfellow Grubb,” Pan answered, taking each of the children by a hand, glancing down at Elli, who still seemed bothered by the magic she had witnessed, in a way she had never been bothered before. The girl was beginning to wonder at his mazes, he thought as he led them off to the treeline. From now on, he would have to be more cautious around her, and Phileas would need to know. “But I’m very glad he brought you to visit with us.  I certainly hope there will be plenty of time for catching you during your stay, though I’m terribly old, and I have a feeling you will always outrun everyone unless being caught is what you desire. Aren’t you glad Prince Alistair has come to visit, Elli?”

The toddler poked her head around Pan’s knee, her mouth drawn to the side, eyes narrowed at their guest. It was a moment before she decided the boy was real enough and nodded.

“He had to return to Aelwyd to take a present from Queen Tessandra to Katydid Sapp. She was sad the girl had to stay home to help her mother, but the Queen is very glad you were able to come. She will want to see you soon, but right now she is occupied with Phileas Foote. I have an idea though, a surprise for her. We shall take her as many blackberries as we can collect in our shirttails, and she will make us the most splendid pie. Wouldn’t that be wonderful?”

“I don’t like pie,” the boy grinned as they reached the old bench where Elli liked to play in the shade of the elder, Tessandra’s only remaining tie to her forest. All of the trees the fairy had planted there in order to provide Foote manor protection were still very young, but this elder had sprung up from the root of a mother tree in Aelwyd, a tree the Patupaiarehe had planted almost a thousand years ago, after much of the forest was destroyed by Gaul and Igaul. It had profound strength and was loyal only to Elli.

The girl ran off to begin gathering her berries, but Peril climbed up on the bench and looked up at Pan with daring. “I don’t like beets either, or cabbage, or peas,” he said, adding a disgusted blech at the end, to make himself perfectly clear.

“I’ll be certain to tell the Queen not to make pea pie,” Pan chuckled. “Is there anything you do like?”

“You’re in luck then, Master Peril,” Pan replied. “You and Elli stay here, collect as many berries as you can before I get back, and I shall bring you some of the most delectable ice cream you’ve ever tasted as a reward.”

Peril did a small celebration as he jumped down from the bench and ran off to join Elli, and as Pan turned to go, leaving the children to their task, he placed a careful layer of labyrinth around them, less a thing and more an impenetrable idea with no exits, save for the tree, where Cosmo, the only person on earth that Queen Tessandra truly trusted, stood guard on the other end. He nodded to Henry Frifogel, who had taken up post in the branches of the elder, and headed to the house to talk with Phileas Foote, to find out just how bad the damage was.

“Come in, Pan,” came Phileas’s heavy voice, before he had even reached the door to knock. Pan opened the door and found him still standing in the window, watching Elli and Peril playing in the blackberry bramble, their hands and clothes stained a delicious purple. Tessandra, who was packing up her bag of tonics, gave Pan a serious look as he crossed the room.

“Did either of them survive?” Pan asked as he reached Phileas’s side.

The man’s eyes fell, and he clenched his jaw, anger and anguish marring his brow. “Eric was slain,” he answered. “They took the boy’s mother.”

“Drensbath?” Pan asked. The woman’s family had long been labeled as traitors, well before the gates had opened, and everyone knew what Tofal did to those who betrayed him. The torture Aya Godfrey would suffer for her crimes was unspeakable. She would have been better off dead.

“I’m certain,” Phileas replied, giving a morbid shake of his head, looking down at his hands, as he drew in a breath, as though those hands held the souls of all those they had lost since the day Elindea Reece was born, and he wondered how many more he could hold before he crumbled under the weight of them. “The boy doesn’t know,” he nodded down to the children, playing so innocently, more to cover his awkward silence than to have an answer. Elli looked up to the window where the man she called father stood bruised and battered, counting the lost, her own mother and father among them, as though she had known the thought that ran through his mind a moment before—all for the sake of one little girl.

“I will tell him what has happened,” Tessandra finally broke her silence. “He is my responsibility.”

“No more yours than mine after a hundred centuries,” Phileas answered her, though he knew she was right. The rest of the nobles belonged to him, and they would fill his hands to bursting before all was said and done. But these two, Elli and Peril, Elindea Reece and Alistair Godfrey, belonged to the fairy queen. Even so, for the sake of that one little girl, he would do anything.

One thought on “Alistair “Peril” Godfrey”