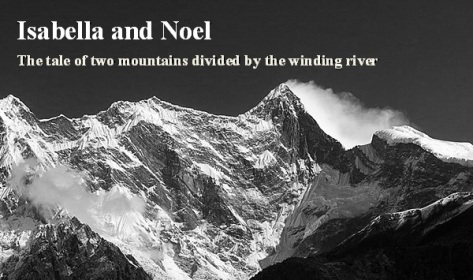 The storm raged with fury, whiting out the night as Isabella stood watch, shivering, not with cold, so much as with fear. The longer she waited, the more she considered turning back for help, but each time the idea of what the Mdrai would think stopped her. She couldn’t help wondering, what would their punishment be, if they were discovered? “Give him more time,” she whispered the words that had become something of a mantra during her vigil, as the wind thundered against the mountain, the minutes creeping past. Someone would surely notice their absence. How would they explain?

“Issa!” a voice called, barely cutting through the deafening wail of the tempest. Relieved and frightened, she ran across the ridge and nearly missed Harvey standing just a few feet below, snow caked to his furs, a person slung over his shoulder. “Issa, here! Help me lift him up!”

“You brought him with you?” she shouted, but she could see the impatience in his eyes, peering out at her from between the layers of his pelts, so Isabella got down on her knees as Harvey untied the rope that kept the wanderer strapped to him and gently let the man fall from his shoulder, into his arms.

“It is worse than I thought,” he said, as she saw the purple swelling of the man’s face and the bloody gashes on his chest and drew back from him. “Just take him under the arms. Hold him steady. I will lift him up to you.”

What they were doing went against every doctrine they had ever been taught by the mothers regarding their interactions with the outside word. They were never to interfere in the way of Fate, not to hinder, nor to help. She had not wanted to go out in the first place, but Harvey… Sometimes he went too far. Even as he was dragging her along by the wrist, unaware how it bruised as he squeezed, fingers digging into her, she knew if she didn’t go with him, he would go alone, and she could not allow him to do that, especially not when he looked at her so desperately, as she pulled away from him, and said, “I followed you into the river because I would follow you anywhere. I need my greatest friend now. Issa, He is going to die. I know it is wrong, but I cannot allow it to happen.”

“People die every day,” she told him. “We are not bothered by death, Harvey. Why should he be different?”

“It was you who was just telling our Mdrai a short while ago that this elf couldn’t be allowed here, that he would change everything, and now you want to go out there to rescue him? What has changed?” she asked, even as she donned the smelly hides he shoved at her. They belonged to his father and were much too large for her, but she put them on anyway, to appease him.

“He will live again, just like everyone else! The mothers told us—”

“No, he won’t,” Harvey answered seriously, shuddering as he said the words, then looking quickly away, shaking his head. “The traveler will not live again, Issa.”

Isabella had watched him as he tugged on his own furs, layer by layer, tying them tightly, the silence that grew up between them overflowing with a million unspoken questions with answers she was not certain she wanted to know. Everyone lived again. Everyone. “Is it Fate, Harvey?” she had asked him gently. “Fate that you and I go out there? Fate that the wanderer die? Tell me what is supposed to be, and that is what I will do.”

“I do not know what is supposed to be,” he had answered her low, “but you are coming with me, because I need you, and I am supposed to be able to depend upon you.”

Now the wind and snow crashed against her, threatening to knock her off balance as she took the battered, bloody man under the arms and hoisted him up, his head lolling limp as her knee slipped from beneath her and she fell backwards under his weight, landing with him sprawled across her legs and chest. “He is already dead,” she said as Harvey climbed up. There was no life left him, she was certain. Why had he come there so unprepared, wearing just a meager cloak for protection? Why had he come alone, in the dark of night? Why had he not sought protection when the storm came, instead of fighting it? “He was a fool, coming here like this, Harvey. Maybe the world is better off without him.”

“He is not yet gone,” Harvey grunted, lifting the man off of her, hefting him over his shoulder once again then extending a hand to help her up from the ground.

Clamoring inside, it took a moment for her eyes to adjust to the absolute blackness of the small cave. Harvey had laid the wanderer down on the cold rock and was preparing wood for a fire. “We should leave him,” she said as she watched him working. “Someone will notice we are gone, Harvey. We have done more than enough.”

“He needs a nurturer. I will stay with him until he wakes.”

“Wakes? He is a ghost, nothing more than a memory. Look at him!”

“He is still there, Issa. Just feel him.” But she glared at him dangerously in answer. “Go on, Issa. I will envelop you so no one will know you are here.”

“Just do it,” he answered, unwrapping the takin skins from his head, tossing them aside.

Isabella swallowed against the knot of uncertainty and dread that fiercely gripped her guts and slowly allowed the wall of protection she had built up around her to slip away. Tears came swiftly spilling down her cheeks, causing the hides to chafe her skin. The elf did not breathe, his heart did not beat, but still he was there, just as Harvey said. This wanderer’s soul inexplicably clung to himself, as if his body was a mountain, and he would climb for an eternity. Overwhelmed with unexpected grief, she hurried to his side, pulling the furs from her as she went. The orange light of the flames Harvey cast filled the small space as Isabella lifted the man’s head and tucked her woolly hood beneath it.

“What are you doing? Put those on, Issa, or you will freeze,” Harvey growled as she struggled to tuck the furs she had been wearing under the man.

“There is no way he will survive lying on the cold ground. He needs warmth. You brought me here to help you save him,” she whispered furiously. “Now, you help me.”

“Then lay the furs out closer to the fire,” he answered. “I will carry him there.”

Still crying, Isabella did as she was told, and soon the man’s body was lain out next to the fire on a pallet of billowing takin hides. She knelt down on the hard ground beside him and leaned over his broken face, hoping to feel even the smallest whisper of a breath, but there was none. Looking up at Harvey, she had no idea what they should do. “We should take him to the mothers,” he said quietly, answering her question, but that was the last thing Isabella could agree to do. The only thing she could think was that the man needed life’s breath if he was ever going to survive, so she tilted his head back, pressed her mouth against his, bloodied and swollen, and breathed her own life into him.

“What are you doing?” Harvey asked, pulling her back by the shoulder.

“Saving him, like you wanted,” she answered, tugging away, giving the traveler another breath of her own. “Come back, Wanderer!” she shouted, shaking his lifeless body as Harvey knelt down beside her.

“Give him another breath,” he said, laying his head on the man’s tattered chest. The wanderer’s blood was on his cheek as he lifted his face and smiled, “He is getting stronger. He will make it. Another breath, Issa!”

But Isabella’s mouth had not quite met the man’s when his eyes opened and he gasped, looking around in confusion, trying to crawl away backwards only to collapse, crying out in agony before he lost consciousness again. Isabella and Harvey both sat very still, watching the man’s chest rise and fall weakly. It was a long moment before Harvey, laughing, reached over and pulled her into his arms. “We just brought a man back from the dead!” he shouted. “We have to take him to the mothers now!”

“Are you insane?” she snapped, pushing him away. “Can you imagine what my own mother would do to me if she knew I was here? Not to mention my Omdra… and yours! No one can ever know what we’ve done.”

“But he needs to be tended. Look at him!”

“He needed to be left out there to die, but what is done is done. We will set his leg and clean his wounds, and then you and I will leave him here,” she insisted. “Whatever happens to him after that is his own destiny. And Harvey, you must agree to occlude him completely.”

“No! I have gone against our ways, helped you bring him back from death.” She cringed at the thought of it, wiping the taste of the elf hard from her mouth, but she knew she would never forget the salt of his sweat and the metallic tinge of his blood on her lips. He breathed with her breath now, and somehow she could not help but resent him for it, as though he had taken from her without asking, even though it seemed so natural a thing to give in that moment, when she felt him fighting to live from beyond the shade. “It is time to leave this man to the will of Fate.”

“Please, do not ask anything more of me, Harvey!” she shouted. “Everything has changed! Just as you said it would!”